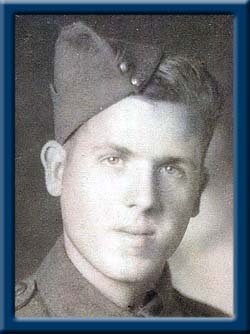 CORKUM – Edison Raymond, 93, of Milton, Queens County, formerly of Pleasantfield, Queens County, passed away peacefully in Queens General Hospital, Liverpool on February 15, 2016.
Born in Milton, he was a son of the late Raymond and Sadie (Townsend) Corkum.
Edison was a veteran of World War II serving with the West Nova Scotia Regiment and the Royal Edmonton Regiment in France, Italy, Belgium, Holland and Africa. Following the war, he returned to Harmony and worked for a time in a sawmill. He moved to Toronto and worked for CNR for fourteen years. In 1964, he returned to Nova Scotia and worked for Nova Scotia Power before being employed with Parks Canada where he helped open Kedji Park. He joined the Commissionaires in 1966 and retired in 1972. He enjoyed reading and woodworking, making picnic tables and lawn furniture in his spare time.
He is survived by his daughters Ann (Terry) Selig of Pleasantfield; Linda (Bruce) DeLong of Kempt. Grandchildren Raymond Woodworth of Milton, Dan Delong of St. John’s NL; Matt (Leanne) DeLong of Barrington; great grandchildren Kaitlin, Logan and Shayleen. Sisters Leona Cameron of Fredericton, NB; Stella Senior of Belleville, ON; brothers Bill (Sylvia) of Wileville; Harvey (Shirley) of Halifax; Lawrence (Alice) of Orillia, ON; Charles (Sylvia) of Ajax, ON; Stanley of Barrie, ON.
He was predeceased by his wife Audrey; great grandson Hayden Woodworth; sister Dorothy Bateman and brothers Robert, Russell and Wilson.
Cremation has taken place under the direction of Chandlers’ Funeral Home, Liverpool. A graveside memorial service will be held at a later date in Harmony Cemetery. No flowers by request, donations may be made to the Canadian Cancer Society. Online condolences may be made to www.chandlersfuneral.com

Offer Condolence for the family of Corkum; Edison Raymond