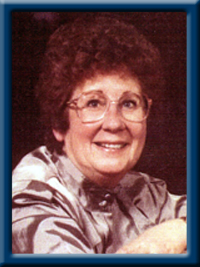 Well-known South Shore free lance journalist and author, Arlyene Barrett Corkum, 82, of East Berlin, passed away peacefully June 22, 2015, after receiving numerous accolades over the years for a lifetime of writing, helping others and promoting the art of writing. Her words and presence will be sadly missed by her family and all that knew her.
Arlyene was the youngest daughter of the late George H. and Pearl (Kieley) Barrett.
She was born in her grandparents’ home on Jubilee Road, Halifax on May 7, 1933. During her formative years in the city, she worked as a teenage fashion photographer. She later directed promotions and publicity for Paramount Theatres. Her passion for writing grew into what would become a life-long career working as a newspaper stringer and journalist for about 60 years. Her works appeared in media published by the Halifax Herald Ltd, Cameron Publications, Transcontinental Media and Graphic Advocate Publications, to name just a few examples. Her emotional writing often appeared locally in the Queens County Advance and the Shelburne Coast Guard as well. She especially enjoyed interviewing and telling stories of senior citizens who have had exemplary and sometimes trying lives. She continued writing and conducting historical research throughout her final years. She also worked in television and produced and hosted several shows viewed both locally and internationally. These include People of Note and Law and the Offender. Her passion included helping others. She is a founder and first President of the South Shore Literary Club, past national Vice-President of the Media Club of Canada, founding member of the Writers Federation of Nova Scotia, Nova Scotia Writer’s Council board member, journalist for and member of the International Association of Women, Past President of the Queens County Historical Society, Milton Heritage Society member and Board of Directors member of the Queens County Museum. She founded and/or edited numerous newsletters within these organizations. She received the Governor General’s Medal in 1992 for historical writing, the Canada 125 National Volunteer plaque in 1992, the International Global Writer’s Award in 1992, a Nova Scotia Government Environment Citation in 1991, a MCC National Press Award, the first Joe Howe Festival Citation Award in 1975, a Clover Poetry Award, a commendation from the CRTC and a Children’s Aid Society First Certification of Appreciation for Foster Care. She also used her great skills to promote and help organize such events as the Ralph Boutilier Festival, Perkins House Tea on the Lawn, First Queens County International Women’s Day Conference and she chaired the Media Club of Canada Memorial Awards. During her career, she covered various Royal visits and met some of the world’s most renowned personalities. She was presented to Lieutenant Governor Lloyd R. Crouse, Icelandic Prime Minister Vidgis Finnbogadottir, Her Royal Highness Princess Margaret, Lord of the Flies author and Nobel Prize winner William Golding, Governor General Jeanne Sauvé, and Prime Minister John Diefenbaker. She was mentioned by many organizations as a key member in addition to being cited as a Canadian Woman of Note in 1975 and World’s Who’s Who of Women in 1977.
In 1958, Arlyene married Clarence H. Corkum and moved to East Berlin, Queens County. Clarence, RCAF military and businessman, passed away in 1978. Arlyene was predeceased by her husband and parents, brothers Arthur G. Barrett and Ronald D. Barrett and sister Velma P. Rafuse.
She leaves her sons Lorenzo Anthony Corkum, his wife Tina, grandchildren Andrew and Thomas of Brooklyn, Queens County and her son Clarence H. Corkum Jr. of East Berlin, Queens County.
Cremation is under the direction of Chandlers’ Funeral Home, Liverpool. She will be interred at the Kieley Family Plot in West Gore Cemetery, Hants County, NS at a later date. Online condolences may be made to www.chandlersfuneral.com

Offer Condolence for the family of Corkum; Arlyene Gertrude Barrett