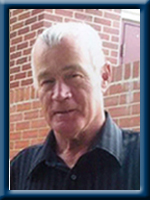 It is with great sorrow we announce the passing of “Dick” on Wednesday, February 25th, 2015, in the Halifax Infirmary, QEII.

Born in Milton, he was a son of Vera (Wolfe) Coombs and the late Joseph Coombs.

Dick worked in the Red Deer, AB oil patch and retired from ACAW local #1325 in 2012. He and Ruby travelled on their Harley Davidson “Pearl” from British Columbia to Newfoundland with many “sisters and brothers” who loved the ride. He lived the dream after moving to his father’s cabin in Waterloo and enjoyed playing crib at the Liverpool Legion with his brother Charles, Sara’s rodeos, Rebecca’s soccer games, Jesse’s singing, fishing with Colin, quiet evenings at the lake with cousins and friends, his sister’s cooking and his mother’s love. Family and friends and especially his friend, “Flash”, will miss Dick’s hugs and his devoted Chesapeake Bay Retriever “Sasha” and “Little One” Lady will miss him dearly.

He was predeceased by a brother Joe.

Cremation has taken place under the direction of Chandlers’ Funeral Home, Liverpool. A Celebration of Dick’s Life, will take place on Friday, March 20th, 2015, at 11:00 a.m., followed by a reception, all from Chandlers’ Funeral Home, Liverpool. Reverend Wade Harvey officiating. Family flowers only. Donations may be made to the ALS Society or to the Nova Scotia Diabetes Association. Online condolences may be made to the family at www.chandlersfuneral.com

Offer Condolence for the family of Coombs; Richard Alan “Dick”