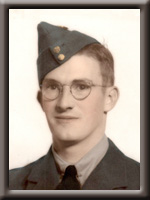 Born in  Liverpool, he was a son of the late Lemuel and Juna (Freeman) Coolen.

Ralph was a veteran of World War Two serving with the Royal Canadian Air Force. Following the war, he was a fisherman before working with Mosher and Rawding Construction and then with Mersey Seafoods Limited of Liverpool. He enjoyed gardening and was an avid “Blue Jays” fan. He was a member of Grace Anglican and Trinity Anglican Churches and was a life member of Mersey Branch #38, Royal Canadian Legion, Liverpool.

He was predeceased by his second wife Maxine (Tilly); son Gregory, brother Karl and stepson Philip.

Funeral service will be Monday, September 6th, 2010 at 11:00 a.m. in Trinity Anglican Church, Liverpool. Chaplain Donald Lawton officiating. Burial will be in Trinity Anglican Cemetery, Liverpool. Family flowers only, donations may be made to Canadian Diabetes Association, the Queens General Hospital Foundation or to any charity. Online condolences may be made to www.chandlersfuneral.com

Offer Condolence for the family of Coolen; Ralph Freeman