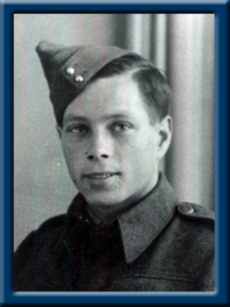 COOKE – Charles Arthur, 97, of Milton, Queens County, passed away at home with his family by his side on March 27, 2020.
Born in Timmons. ON, he was a son of the late Tremaine and Lena (Langley) Cooke.
Much loved by his family and friends, “Charlie” was a man of many talents and trades. At the age of 17, he answered the call to protect his country, joining the armed forces. He initially served with the 17th Duke of York Royal Canadian Hussars (DYRCH), then was transferred to the 3rd Division Royal Canadian Army Service Corps, seeing action through the United Kingdom, Central Mediterranean and Northwest Europe, most notably France, Belgium, Germany and Italy. It was during leave that he met the love of his life, Florence, a young Scottish lass from Glasgow.
After the war, he worked for many years as a farm manager in Ontario before returning to Nova Scotia with his family. Charlie worked for a time with Nova Scotia Light and Power and served as cook on board various Liverpool fishing vessels. He was a member of Mersey Branch #38, Royal Canadian Legion, Liverpool. For many years he was an active member and deacon of Milton Christian Church. He was a member of the CMF and enjoyed preparing meals for the monthly meetings. Charlie was instrumental in setting up and helping to manage a Food Pantry through the church which would later evolve into the Queens County Food Bank. One of his favorite pastimes was to volunteer wherever he was needed. He and Florence often volunteered to cook for the church summer camp, Johnstone Christian Park and he was often called upon to take on the role of Santa for the church and school events.
In later years, Charlie was most happy puttering about in his workshop and fixing whatever was broken and building scale models of WWII aircraft. He took great pride in his home and property and would insist on doing yard chores himself up until this last year. Visits from his children, grandchildren and great grandchildren were always a highlight of his day. One of his most endearing traits was his wit and sense of humor. No matter how bad things in life were, he always had a positive and usually funny way to brighten up any day. Those who spoke to Charlie always walked away with a smile.
He is survived by his sons Charles (Dolene) of Bridgetown, John of Western Head and Paul (Karen) of Milton. His daughters Linda Douthwaite of Dartmouth, Diane (Wayne) McPherson of Wolfville, Heather and Eileen, both of Milton. Grandchildren Tanya, Teresa, Rick, Bobby, Dave Stephen, Dayle, Diane, Amanda and Christine. Several great grandchildren and many nieces and nephews.
Besides his parents, Charlie was predeceased by his beloved wife of 57 years, Florence (MacKay), his brothers Frank, James, Irving and Ken and his sisters Zelma, Irene and Bertha. He was the last surviving member of his immediate family.
Cremation has taken place under the direction of Chandlers’ Funeral Home, Liverpool. A memorial service will be held at a later date from the Milton Christian Church, Disciples of Christ. No flowers by request, donations may be made to the Milton Christian Church, Disciples of Christ or to the Queens General Hospital Foundation. Online condolences may be made to www.chandlersfuneral.com

Offer Condolence for the family of Cooke; Charles Arthur