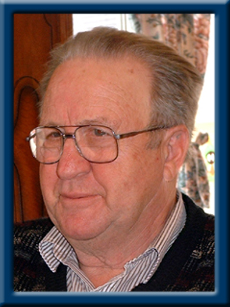 Conrad – Robert “Bob” Charles, 86 of Bridgewater, NS, formerly of Hunt’s Point, Queens Co. died peacefully on Thursday May 24, 2018, in South Shore Regional Hospital, Bridgewater, N.S; surrounded by his family
Born in Liverpool he was the son of the late Charles and Ethel (Martin) Conrad.
Bob was a “jack of all trades” and had mastered several. His main occupation was a refrigeration engineer for National Sea Products in Lunenburg retiring in 1989. Bob was always mechanically inclined and could fix almost anything with mechanics wire, electrical tape and fibreglass. He will be fondly and lovingly remembered as a “pack rat extraordinaire”. If Bob didn’t have it, you didn’t need it and was always willing to help out anyone in need even to the point of selling the tires off his daughter’s car.
Surviving are his wife Marie (Oickle)(Whynot); his daughter Lisa (David) Magee of Smiths Falls, On; sons Michael (Amanda) of Kentville, N.S; and Darryl of Bridgewater, N.S; grandchildren Danielle, Robin, Ryan, Terry, Brook and Sara.
Bob was predeceased by his first wife Marlene (Bowles) and his sisters Beulah Oickle and Janet Whynot.
Visitation will be Sunday, May 27, 2018 from 7 until 9 p.m. in Chandlers’ Funeral Home, Liverpool. Funeral service will be Monday, May 28, 2018 at 2:00 p.m. in St. James Anglican Church, Hunt’s Point. Reverend Judy Cross officiating. Burial will be in St. James Anglican Cemetery. Family flowers only. Donations may be made to Red Cross, VON and Heart and Stroke Foundation of Nova Scotia. Online condolences may be made to www.chandlersfuneral.com

Offer Condolence for the family of Conrad; Robert Charles “Bob”