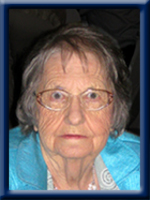 Born in Eagle Head, Queens County on September 16, 1929, she was a daughter of the late John and Laura (Munroe) Conrad.

Pheobe’s family came first and foremost and she devoted her life to her son Gordon.  In her early years, she worked cleaning houses and looking after children and later worked at the Mersey Seafood Fish Plant in Liverpool, Queens County. She enjoyed playing cards, going out for supper with friends and family, traveling, loved animals and she loved spending time with her granddaughter, great-grandchildren and her many nieces and nephews.

She was predeceased by her brother Leonard and sister Sadie (Conrad) Parlee.

Visitation will be held  Monday, February 10, 2014 from 7:00 pm until 9:00 pm in Chandler’s Funeral Chapel, Liverpool. A celebration of Pheobe’s life will be held Tuesday, February 11, 2014 at 11:00 a.m.  from St. John’s Anglican Church, Eagle Head.  Reverend Shona Boardman officiating.  Burial will be in St. John’s Anglican Cemetery, West Berlin. Family flowers only.  Donations can be made in Pheobe’s name to the Canadian Cancer Society or the Queen’s Manor. Online condolences may be made to www.chandlersfuneral.com

Offer Condolence for the family of Conrad; Pheobe Mae