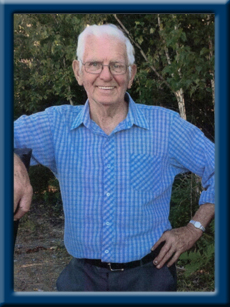 Born in Liverpool, he was a son of the late Adrian and Marion (Benvie) Conrad.

In his younger years Moyal fished with his Grandfather Spencer and his Uncle Henry, before going to work at the Liverpool Dominion Store, working his way up to becoming the branch manager. Moyal and Jeanne moved to Greenfield in 1965 after the birth of their first child, Moyal Jr.. Moyal and Jeanne later operated Jeanne’s General Store in Greenfield for a number of years before opening Riverview Lodge in Greenfield as a hunting and fishing lodge / bed and breakfast for many years. Moyal was a licensed master guide and he also owned and operated Riverview Lures, selling hunting and fishing supplies. Moyal was very active in his community, serving many years as a councilor for the Region of Queens and he was also instrumental in starting the International Woodsman Competition and Maritime Woodsman Competition in 1986 that ran for many years, even dabbling in competing himself. He had many passions including salmon fishing, fly tying, bird hunting at his camps in Jones Harbor and Cherry Hill, prospecting with his good friend Allan Hooper and his father. Moyal was also very athletic and enjoyed playing sports. In Moyal’s later years he stayed close to home to care for his beloved wife, Jeanne.

Cremation has taken place under the direction of Chandlers’ Funeral Home, Liverpool. A Celebration of Moyal’s Life will be held at a later date. No flowers by request. Donations may be made to the Greenfield and District Fire Department. Online condolences may be made to www.chandlersfuneral.com

Offer Condolence for the family of Conrad; Moyal James