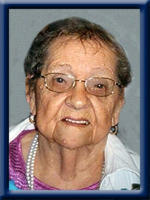 Born in Milton, she was a daughter of the late Nathan and Viola (Whynot) Hazlett.

Jessie served with the Canadian Women’s Army Corps during World War Two in P.E.I. and Nova Scotia. She was a former employee with K&W Bookbinding, Liverpool. Jessie loved her gardens, reading, cooking; best known for her fried chicken, tea parties with her great grandchildren, but, most of all, loved her family who will fondly remember her for  her “blunt honesty.”

Cremation has taken place under the direction of Chandlers’ Funeral Home, Liverpool where funeral service will be held Thursday, January 16, 2014 at 11:00 a.m. Reverend Judy Cross officiating.  A private family burial will take place at a later time. In lieu of flowers, donations may be made to St. John’s Anglican Church, Eagle Head. Online condolences may be made to www.chandlersfuneral.com

Offer Condolence for the family of Conrad; Jessie Maude