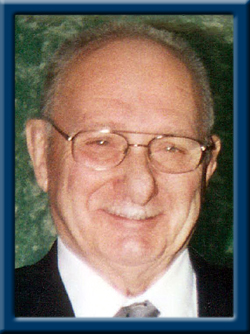 CONRAD – James Lambert 89, of Liverpool, formerly of West Berlin, Queens County, passed away February 27, 2016 in Queens General Hospital, Liverpool.
Born in Eagle Head, Queens County, he was a son of the late Lambert and Effie (Weagle) Conrad.
Lambert was a veteran of World War II, serving with the Merchant Navy. In his early years, he was employed with the Markland Shipping Company going to sea on the Vinland, Liverpool Packard, Liverpool Loyalist and the Markland. As the family grew, he stayed home to go fishing, working as a stevedore at Bowater Mersey Paper company and working his small farm. He was active with Mersey Branch, #38, Royal Canadian Legion, Liverpool, Liverpool Senior’s Club and enjoyed playing his music at local music jams and variety shows.
He is survived by his companion Doris Kaulback, his sons James (Faye) of Port Mouton; Stan (JoAnne) of Bridgewater; Allen (Debbie) of West Berlin and Lewis (Victoria) of Eagle Head, daughter Stella of Bridgewater, 9 grandchildren and a number of great grandchildren, his sister Doris Wentzell of Beach Meadows.
He was predeceased by his wife Gloria (Whynot), his step father William Moreau, his grandson Jamie Blakefield Conrad, his sister Mildred Mansfield and his brothers Jordon, Erlin and Kenneth.
Visitation will be Wednesday, March 2, 2016 from 7 until 9 p.m. in Chandlers’ Funeral Chapel, Liverpool. Funeral service will be Thursday, March 3, 2016 at 11:00 a.m. from Trinity Anglican Church, Liverpool. Reverend Bonnie Baird officiating. Reception to follow in the church hall. Burial will be in St. John’s Anglican Cemetery, West Berlin. Family flowers only, donations may be made to the IWK-Grace Hospital, Halifax, the Canadian cancer Society or to a charity of your choice. Online condolences may be made to www.chandlersfuneral.com.

Offer Condolence for the family of Conrad; James Lambert