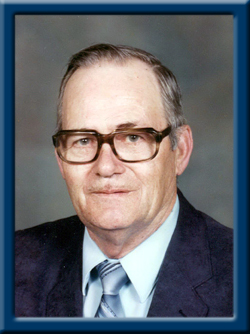 CONRAD – Erlin Wallace, 93, of Beach Meadows, Queens County, passed away peacefully at home on Thursday, December 24, 2015 surrounded by his family.
Born in Eagle Head, Queens County, he was a son of the late Lambert and Effie (Weagle) Conrad.
Erlin was a veteran of the Second World War serving with the Merchant Navy and survived being torpedoed during his service. He was an employee with Bowater Mersey Paper Company Limited for thirty years retiring in 1986 as foreman for the woodroom. He was a former member of the Oddfellows, Liverpool and was an active volunteer in many community organizations as well as a member of Emmanuel United Church and the Queens County Historical Society.
He is survived by his wife Wilhelmina (Fralic); his daughters Reverend Karen Ohrt of Liverpool; Rosanne (Lawrence) Williams of Beach Meadows; his son Dennis of Beach Meadows; his grandchildren Danielle Baines, Jeffrey Ohrt, Suzanne Ohrt, John Paul (Katherine) Conrad, Justin Cody Williams and Dustin Conrad Williams; his great grandchildren Madison Leigh Baines and Alexander John Paul Conrad. His sister Doris Wentzell of Beach Meadows and his brother Lambert of Liverpool.
He was predeceased by his step-father William Moreau; his sister Mildred Mansfield and his brothers Jordan and Kenneth.
Cremation has taken place under the direction of Chandlers’ Funeral Service Limited, Liverpool. A private family graveside memorial service will be held at a later date in Beach Meadows Community Cemetery with Lay Minister Peter Anthony officiating. No flowers by request, donations may be made to Emmanuel United Church. Online condolences may be made to www.chandlersfuneral.com

Offer Condolence for the family of Conrad; Erlin Wallace