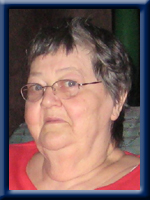 Beverly Gail Conrad (nee Freeman) -72, of Liverpool passed away peacefully surrounded and tightly held by her family at Queens General Hospital in Liverpool on November 22, 2010.

She was the oldest daughter of the late Ruth Eldora Boland and Joseph Allan Freeman.

Bev worked at Fahie’s Nursing Home, Lane’s and the Transcotia Motel as a cook.

There will be a celebration of life her held at the Brooklyn Community Hall on Saturday, November 27th from 1-3 pm.  No flowers by request. Donation may be made to Long Lake Camp. Condolences may be made through www.chandlersfuneral.com

Offer Condolence for the family of Conrad; Beverly Gail