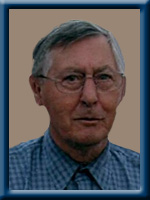 Born in West Berlin, he was a son of the late A. Lambert and Emily (Teal) Conrad.

Bert was a long time employee with Bowater Mersey Paper Company having worked there for over 25 years until his retirement. He enjoyed working around his house “puttering” in his spare time and driving; doing  local travelling. He also enjoyed listening to the old style country and western music and reading the Chronicle-Herald which was a daily ritual for him.

He is survived by his wife Greta, his daughter Tammy (Bill) Legere of Dartmouth and his son Darren (Clarice) of Orangeville, ON.

He was predeceased by his sisters Kathleen and Dora White and his brothers Carl, Abbott and Wilson.

Visitation will be Wednesday, February 23rd, 2011 from 7 until 9 p.m. and funeral service will be Thursday, February 24th, 2011 at 11:00 a.m., both in Chandlers’ Funeral Chapel, Liverpool. Chaplain Donald Lawton officiating. Burial will be in St. John’s Anglican Cemetery, West Berlin. Family flowers only, donations may be made to North Queens Nursing Home, Caledonia. Online condolences may be made to www.chandlersfuneral.com

Offer Condolence for the family of Conrad; Angus “Bert”