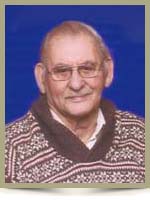 Born in Cherry Hill, he was a son of the late Spencer and Eudavilla (Conrad) Conrad.

Adrian worked on the Mersey boats until he enlisted in the Royal Canadian Army during World War II serving with coastal defense on Canada’s Atlantic and Pacific shores as well as the St. Lawrence. Following the war, he worked for Bowater Mersey Paper Company in Brooklyn as a millwright until his retirement. He enjoyed hunting, fishing, trapping, gardening, woodworking and tinkering in his spare time.

He was predeceased by his wife Marion (Benvie) , a daughter Marilyn, son Keith and a brother Henry.

Visitation will be Sunday, November 18th, 2012 from 7 until 9p.m. in Chandlers’ Funeral Chapel, Liverpool. Funeral service will be held Monday, November 19th, 2012 at 11:00 a.m. in Pilgrim United Church, Brooklyn. Lay minister Peter Anthony officiating. Burial will be in Woodlawn Cemetery, Cherry Hill. Family flowers only, donations may be made to the Canadian Cancer Society. Online condolences may be made to www.chandlersfuneral.com

Offer Condolence for the family of CONRAD; Adrian Judson