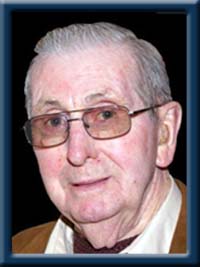 Born June 1st, 1932 in Middlewood, he was a son of the late Robie and Letha (Whynot) Connolly.

Bill was owner and general manager of Connolly Construction for 20 years. He was the former co-owner of Sandy Cove Hardwood and a former employee of Bowater Mersey Paper Company. He was a life long member of St. Andrews Anglican Church in Brooklyn where he served as a warden and as a Sunday school teacher. He was involved with cub scouts for many years and was a hobbyist. Bill was very family oriented and loved the yearly family reunions.

He is survived by his loving wife of 61 years Madelyn (Smith); his sons Ron (Mary Lynn) of Brooklyn, Gary (Pat) of New Minas, Terry (Donna) of Brooklyn and his daughter Nancy (Earl) Lawrence of Charleston. His grandchildren Tanya, Amber, Michelle, Jamie, Kristen, Jennifer, Melanie, Andrew, Sarah and Emily as well as 19 great-grandchildren. His sisters Elsie Wolfe of Brooklyn, Betty Getson of Bridgewater and Shirley Brown of Dartmouth. Many nieces and nephews.

He was predeceased by his sisters Kathleen and Rosabelle and brother Lione as well as two brothers in infancy.

As per Bill’s request, his body has been donated to Dalhousie. A celebration of Bill’s life will be held Sunday, August 5th, 2012 at 2:30 p.m. from St. Andrews Anglican Church in Brooklyn. Chaplain Donald Lawton officiating.  A reception will follow in the church hall. No flowers by request, donations may be made to Queens General Hospital Foundation or to St. Andrews Anglican Church. Online condolences  may be made to www.chandlersfuneral.com

Offer Condolence for the family of Connolly; William Robie “Bill”