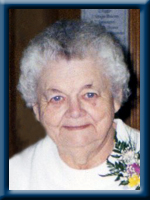 CONNOLLY – Beatrice “Daisy” – 89, of Mill Village, Queens County, passed away peacefully in Queens General Hospital, Liverpool on Thursday, October 2, 2014 with her daughters by her side.

Born in Rose Bay, Lunenburg County, she was a daughter of the late C. Obediah and Florence E, (Young) Wentzell.

Prior to her marriage, Daisy was a ledger clerk with the Royal Bank of Canada New Germany Branch. After her marriage, in addition to being a devoted homemaker, she was a part time store clerk in Liverpool and later at the Mill Village General Store. Daisy was an active member of Bethany United Church, Mill Village as well as a life member of the UCW. She was also a life member of the Ladies Auxiliary of the Mill Village and District Fire Department. Daisy will always be fondly remembered by the warmth she brought to her home with her loving acts.

She was predeceased by her husband Ralph and her son William C.R. “Bill”.

Visitation will be Sunday, October 5, 2014 from 7 until 9 p.m. and funeral service will be Monday, October 6, 2014 at 11:00 a.m., both in Chandlers’ Funeral Chapel, Liverpool. Lay Minister Peter Anthony officiating assisted by Reverend Vivian Moores. Internment will be at later date following cremation. Family flowers only, donations may be made to Bethany United Church, Mill Village. Online condolences may be made to www.chandlersfuneral.com.

Offer Condolence for the family of Connolly; Beatrice “Daisy”