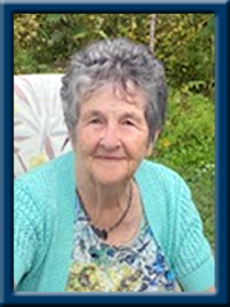 Colp – Virginia Louise, age 90, of Colpton, Lunenburg County, passed away peacefully on Wednesday, October 26th, 2022 in South Shore Regional Hospital, Bridgewater.
Born in Yarmouth, N.S., Ginny was a daughter of the late Henry Conrad and Clissie  (Nickerson) Burrill.
Ginny left home to attend Normal College (Nova Scotia Teachers College) then taught in Hemford and Cornwall prior to marrying Arlyn B Colp of Colpton. After starting a family, Ginny returned to teaching in 1967, at New Germany Elementary and New Germany Rural High. She loved teaching, and especially those who had a hard time navigating the regular school system. As well, she tutored many at her home over the years. She spent summers improving her teaching skills by attending Summer School in Halifax. Over the course of her lifetime she also assisted at the farm as a milk producer for years, lathe mill, saw mill, and after retiring from teaching, she, Arlyn and Brent started Colp Berry Farm u-pick and she became an expert in strawberries. Her faith in God was strong, and she knew He would provide what she needed.
No one visited without being offered a cup of tea, and usually food to accompany it, be it pie, cookies or apple dumplings. Ginny made the best biscuits often topped with homemade jam, or sometimes they ended up in strawberry shortcakes. A good many  card games took place over the years, and Arlyn and Ginny enjoyed many years on a bowling league in Bridgewater. Ginny was always proud of the high score of 141 (trophy to prove it) and as her children started to bowl, always made sure they knew she had the highest score (and none of us beat it much to her delight). Arlyn and Ginny spent many winters in Florida and it was always fun to join them for a week. She loved family and hosted many family farm vacations over the years, building memories that lasted forever. Ginny also enjoyed a good party and never failed to find a reason to have one, insisting that birthdays be celebrated on the exact day, and anniversaries could not be missed. Her flower gardens were her pride and joy, and a new growing season never started with out an additional bed being created and filled with something new. She was loved!

Offer Condolence for the family of Colp; Virginia Louise (Burrill)