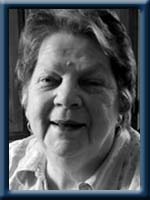 Born in Milton, she was a daughter of the late Ernest and Bertha (Seamone) McKinnon.

After Rosie’s children went to school, she chose a career at K&W Enterprise Book Bindery where she worked for over ten years. She enjoyed her time there and made many lifelong friendships. She was an active member of St. John’s Anglican Church and the A.C.W. in Eagle Head. Rosie was well known for her lobster chowder suppers, as well as her Pound Cake, that she was forever in competition with her rival and mentor Lalia Conrad. Rosie had many activities; she loved singing, sewing, knitting and spent many hours playing cards with family and friends. After Rosie’s retirement, she and Clyde enjoyed many trips with their camper, and later many fond years at their cabin in Ponhook.

She is survived by her husband of sixty-four years, Clyde Harris, her children: Louise (Gerald) Gaetz of Beach Meadows, David (Anna) of Bramalea, ON, Deborah Boyce of Toronto, Marilyn “Mitzie” (Douglas) Kent of Beach Meadows, Becky Colp (Joe Masella) of Kirkland, PQ. 10 grandchildren and 15 great-grandchildren. Her brother Ingram of Hamilton, ON.

Offer Condolence for the family of Colp; Rosalind Marjorie “Rosie”