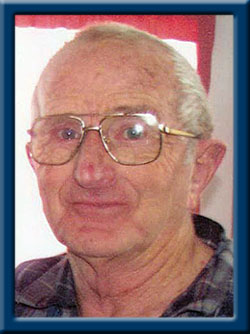 COLP – Frank H., 89, of Port Mouton, Queens County, passed away suddenly at home on Monday, March 21, 2016.
Born in Port Mouton, he was a son of the late Elmer and Mary (Gray) Colp.
Frank worked for Nickerson Brothers Fisheries then with C.W. MacLeod Fisheries retiring as freezer boss after 38 years. He worked on and off with Canus Fisheries and Clearwater Fisheries as well. He enjoyed the woods, hunting and cutting wood. He was an avid Blue Jays fan.
He is survived by his daughters Brenda Whynot and Mary (Donald) Atkinson, both of Liverpool, Paula Colp of Port Joli, May (John) Daniels and Wendy Colp (Tim Currie), both of Bridgewater, Stacy Colp of Port Mouton. His sons Stephen (Shelly) of Brooklyn and Robert of Port Medway. 7 grandchildren and 11 great grandchildren, his sister Marie Woodsworth of Chelsea.
He was predeceased by his wife Audrey (Williams), his son Hughey, his sisters Marguerite Woof and Olive Huskins and his brothers Gerald, Isaac and Robert.
Visitation will be Sunday, March 27, 2016 from 7 until 9 p.m. and funeral service will be Monday, March 28, 2016 at 11:00 a.m., both in Chandlers’ Funeral Chapel, Liverpool. Burial will be in Peaceful Hill Cemetery, Port Mouton. Family flowers only, donations may be made to Heart and Stroke Foundation. Online condolences may be made to www.chandlersfuneral.com

Offer Condolence for the family of Colp; Frank Hugh