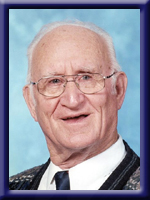 Brenton Palmer Colp, 88, born in West Berlin, passed away at 1am on January 2, 2014 peacefully at the Hants Community Hospital Palliative Care Unit.

At the age of 15 he contracted Polio but you would never know that he had it as he never complained about it. He ran the general store in West Berlin and later was the Foreman at K&W Book Binding and Helen ran the store. His biggest enjoyment other than family time was playing cards and marbles which he always made time for.  He was an avid musician who was well known to all the hall dance goers on the South Shore. He and his Sister Phyllis played at most of the weddings in the area and when they weren’t entertaining somewhere, you could find them surrounded by friends at their home. As soon as 2 or 3 people gathered, his fiddle came out and the dancing would start. Most of the time, it was a family affair when the music started as several of the girls also were musically talented.

The visitation will be held at Chandlers Funeral Home in Liverpool, NS. today (Monday, January 6, 2014) from 7 until 9 p.m. and  funeral service will be held Tuesday, January 7, 2014 at 11:00 a.m. from St. Johns Anglican Church in Eagle Head with private burial at St. Johns Anglican Cemetery, West Berlin.  Reception will follow at the Port Medway Fire Hall. Donations may be made to the Port Medway Volunteer Fire Department or the Easter Seals Foundation. Online condolences may be made to www.chandlersfuneral.com

Offer Condolence for the family of Colp; Brenton Palmer