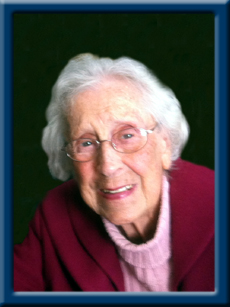 COLLINS – Gladys Marian Elsie, 98, of Halifax, passed away on Sunday, October 8, 2017 at Parkstone Enhanced Care, Halifax, NS.
Born in Parkstone, Dorset, England, she was a daughter of the late Charles and Elsie (Maidment) Jeffery.
She met Ellery in England while they were serving in the Second World War, and moved to Canada after the war. She was a member of the heroic generation of War Brides who came from Britain in the late 1940s, and enjoyed activities over the years with the Nova Scotia War Brides. Although heartbroken by the death of her 7-year-old son John, and Ellery’s early death in 1987, Gladys’ strength of character and perseverance helped her live a long and satisfying life. She saw many changes in the world, and embraced the best of them. Gladys was amazed and delighted when she could Skype from her new computer in Halifax, with Kati, Stefan and Rosie in France. Mom enjoyed her cottage on the Amherst Shore, travelling, and excelled at many crafts. Gladys was a loving wife, mother, grandmother, sister and aunt, and always enjoyed the company of family and friends. We will remember her warmth and her sense of humour.
Mom is survived by daughter Joan (Janos) Kovacs, Edmonton, Alberta; son James Collins, Vancouver, British Columbia; granddaughter Katalin (Stefan Lalonde) Kovacs and great-granddaughter Rosie, of Brest, France; and many nieces and nephews in England and Nova Scotia.
Mom was predeceased by her husband and soulmate, Ellery Collins; young son John Collins; two sisters and a brother in England.
There will be no visitation at the request of the family. A service to celebrate Gladys’ life will be held at 1:30 p.m. on Tuesday, October 17, 2017, at Bethany United Church, 7171 Clinton Avenue, Halifax, Rev. Kevin Little officiating. A private family burial will take place in Milton, Nova Scotia at a later date. Family flowers only, by request. Donations in memory of Gladys may be made to Brunswick Street Mission, brunswickstreetmission.org or 2107 Brunswick Street, Halifax, B3K 2Y8. Funeral arrangements entrusted to Chandlers’ Funeral Home, Liverpool, Nova Scotia. Online condolences may be sent to chandlersfuneral.com.

Offer Condolence for the family of Collins; Gladys Marian Elsie