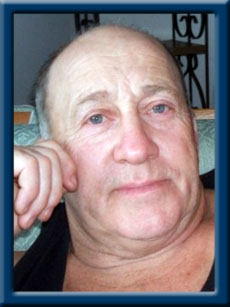 COLLIER – Bernard “Bernie” T., 66, of South Brookfield, Queens County, passed away peacefully in Queens General Hospital, Liverpool. On Sunday, November 5, 2017
Born in Piccadilly Head, NL, he was a son of the late Raymond and Sarah (Benoit) Collier.
Bernie was a construction worker and an underwater welder. He was an avid outdoorsman who loved hunting, fishing and four wheeling. He also loved to play cards and darts. He will be fondly remembered as a loving husband, father, grandfather and great grandfather and an “alright good fella”.
Bernie is survived by his wife Barbara (Warner)(Landry); his daughter Lisa of South Brookfield, his son Paul (Lacey) of Oromocto, NB; his step daughters Lisa (Shannon) Murphy of Ketch Harbour and Nanette (Todd) Murphy of Spryfield. His granddaughters Paige MacNutt and Claire Collier, his step grandson Sheldon (Dawn) Murphy and his step great grandson Leland Murphy. Several sisters and brothers.
He was predeceased by his first wife Ardith (Lowe).
Cremation has taken place under the direction of Chandlers’ Funeral Home, Liverpool. At Bernie’s request, there will be no funeral service. No flowers. Donations may be made to the ALS Foundation. Online condolences may be made to www.chandlersfuneral.com

Offer Condolence for the family of Collier; Bernard “Bernie” Thomas