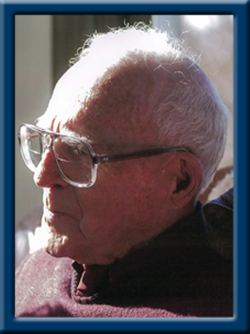 The death of Ronald Eugene Cole occurred in the early morning hours of Friday, March 18th, 2016 at his home in Milton, Queens County, N.S.
He was born in Milton on April 8th, 1918, the only son of John C. Cole and Matilda Cole (nee McKenna). He bravely lived the last few years of his life since his beloved wife Myra (nee Inness) predeceased him. She was his constant companion and best friend. After her death he continued to spend a large part of his time on his writing, some of it replacing his conversations with her. Theirs was a true and lasting love story.
His older sister Virginia Hawkins of Devon, Alberta, recently predeceased him, and he is survived by his younger sister Dorothy Fitzner of Halifax.
His early life was in a very happy home and the love among his parents, sisters, and him has never ended.
He leaves surviving him his elder daughter M. Christine Conrad, her husband Borden L. Conrad of West Berlin, N.S., and his grandsons Hayes W. Conrad and Nathaniel I.W. Conrad; his younger daughter Teresa A. Ruzycki and her husband John of Yorkton, Saskatchewan, and his granddaughter Charlotte Sharkey and her husband Joseph and their son Ethan; and his son John R. Cole, his companion Dianne Dorey, of Milton, and his grandson Benjamin E. Cole. In the latter part of his life he was tenderly and lovingly cared for by Dianne Dorey.
He served with the Royal Canadian Army during World War II in various parts of Canada. After the War, he and his wife returned to Milton and he worked as a machinist at the Bowater Mersey Paper Company. He was a life long member of St. Gregory’s Roman Catholic Church. After a long and very healthy life spent very privately with his wife and family, Dianne Dorey gave him his wish to die in the house in which he had lived for more than sixty years. She was helped by the excellent services of Queens Home Care and the V.O.N. and respites from his daughter Christine’s visits. His daughter Teresa was able to get home from Saskatchewan and be with him for his last days. He was greatly respected by everyone who knew him and greatly loved by his family. He will always be sadly missed.
His funeral is under the direction of Chandler’s Funeral Home and will be conducted by Father Keith Billard at St. Gregory’s Church in Liverpool, N.S., at 2 p.m. on Monday, March 21st, with burial following in St. Gregory’s Cemetery on College St., Liverpool. The pall bearers will be Frank Babin, Jordan Oickle, George Brady and his wife’s nephews Christopher Inness, Robert Inness, and Jeffrey Inness. In lieu of flowers, donations may be made to St. Gregory’s Church or to the V.O.N.

Offer Condolence for the family of Cole; Ronald Eugene