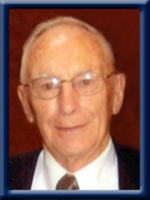 Born in Worcester, MA, he was a son of the late John and Mary (Roberts) Cody.

John was a veteran of World War II serving with the Royal Canadian Air Force in England. Following the war, he returned to school in Boston and became an aircraft Maintenance Engineer. He returned to Canada and worked in aircraft maintenance before becoming an Air Worthiness Inspector for the Department of Transportation retiring as the Director of the Atlantic Region. After his retirement, he acted as a consultant for a few years. He was an active member of St. Andrew’s Anglican Church, Brooklyn and served as a lay minister. John enjoyed the outdoors, spending time working on his property and gardening. His greatest joy was spending time with his family, especially his five grandsons.

John is survived by his daughter Suzan (Dr. Garry) Morash of Beach Meadows; his grandsons Josh (Tiffiney), Joel, Jake (Emily), Jeffrey (Lauren) and Jordan, his great-grandson Nolan as well as a number of nieces and nephews.

He was predeceased by his wife Doris (Harding) and his sister Jean Fullerton.

Cremation has taken place under the direction of Chandlers’ Funeral Home, Liverpool. Funeral service will be Thursday, July 25th, 2013 at 2:00 p.m. in St. Andrew’s Anglican Church, Brooklyn. Reverend Judy Cross officiating. Burial will be in Seaside Cemetery, Brooklyn. Family flowers only, donations may be made to any charity. Online condolences may be made to www.chandlersfuneral.com.