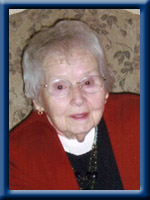 Clattenburg, Ruby Pearl, 91, of Brooklyn, Queens County, passed away Sunday, November 27th, 2011, in Queens General Hospital, Liverpool.
Born in Milton, Queens County, on October 31st, 1920, she was a daughter of the late Milford M. and Annie (Hall) Gardner of Brooklyn.
Ruby was in the first graduating class of the then new Liverpool Regional High School in 1938. On February 26th, 1943, she married Gerald Clayton Clattenburg, from Port Medway, in a service held at the Brooklyn United Baptist Church. While Gerald served overseas during World War II, Ruby worked in Halifax. Following the war, Ruby and Gerald operated the Modern Lunch Restaurant in Brooklyn until 1967. From 1967 until her retirement in 1984, she worked side by side her husband at the Liverpool Co-op Store in Brooklyn. In her younger years, Ruby played broomball, curling and golf. In past years, she was active in the Brooklyn W.I.N.S., the Canadian Red Cross and the Queens County Branch of the Arthritis Society. She was a member of the Seaside Seniors and Brooklyn Seniors Clubs. She was an avid reader and enjoyed playing cards. In retirement, Ruby and Gerald shared the joy of travelling to Alberta, British Columbia, the Northwest Territories, Bahamas, Florida and Bermuda. Ruby was also a life long member of the Brooklyn United Baptist Church.
She is survived by sons Rodney, of Brooklyn; Barry, of Edmonton, AB. Sister Ruth Norton Murray of Liverpool, brother in law Ernie Lloyd of Bridgewater, sister in law Evelyn Weeks of Ottawa and special niece Delitha Norton of Liverpool.
She was predeceased by her husband Gerald in 1992, sister Nellie in 2008 and daughter in law Beth in 2011.
Cremation has taken place under the direction of Chandlers’ Funeral Home, Liverpool. In keeping with Ruby’s wishes, there will be no funeral service. Interment will be in Seaside Cemetery, Brooklyn. Family flowers only, donations may be made to any charity. Online condolences may be made at www.chandlersfuneral.com. Ruby’s family sincerely thank Dr. Tim Woodford, Region of Queens Home Support team, Queens County Branch of V.O.N. Home Care for the exemplary care and support.

Offer Condolence for the family of Clattenburg; Ruby Pearl