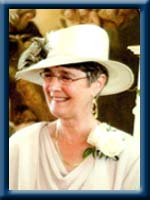 CLATTENBURG – Janice Christine “Jan”,  67, of Liverpool, passed away peacefully at home on Thursday, July 5th, 2012 surrounded by her loving family.

Born in Dover, England, she was a daughter of the late Maxwell and Christina (Naylor) Low.

Jan immigrated to Canada in 1966, eventually settling in Victoria, BC where she and former husband Eric raised Julie and Jamie. Jan moved to Liverpool in 1991 to marry David, whom she met through their shared love of figure skating.  Jan had a life long passion for skating that started in Scotland where she was crowned Scottish Champion in 1963. She continued her involvement in the figure skating world after moving to Canada, from judging to administration to teaching. Jan was greatly respected for her commitment to the sport in both BC and Nova Scotia. Most recently, Jan was a key part of the Queens County Blades skating club where her passion and commitment will be sorely missed. Jan brought a joy and optimism to the club and took the greatest pleasure in helping kids gain confidence on their skates.

Jan was eternally optimistic and graced those in her presence with her wit and compassion. Jan had a great sense of humour that she held onto right to the end. Jan’s strength of character left an impression on everyone she was close to. She was a dedicated and loving Nanny to her four grandchildren who brought a cherished spark to her life. An accomplished seamstress, Jan put those skills to creating  countless skating  and music festival costumes over the years, something she took great joy in. There is hardly anyone who learned to skate in Queens County over the last 20 years who hasn’t worn an outfit created by Jan. She  will be dearly missed by her family and by the many friends she leaves behind in Nova Scotia and across the country.

A celebration of Jan’s life will be held Wednesday, July 11th, 2012 from 5:30 until 8:30 p.m. at Queens Place, Liverpool. No flowers by request. Donations may be made to The Queens County Blades skating club or the Canadian Cancer Society. Jan’s family  would like to express their deep gratitude for the excellent care she received from Dr. Blackadar and all the doctors, nurses and care workers over the last year. Online condolences may be made to www.chandlersfuneral.com

Offer Condolence for the family of Clattenburg; Janice Christine “Jan”