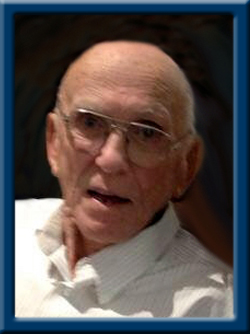 CLATTENBURG – Charles George, 85, of Port Medway, Queens County, passed away peacefully in Queens Manor, Liverpool on Tuesday, January 5, 2016.
Born in Southwest Cove, Queens County he was a son of the late Laurie and Flossie (Selig) Clattenburg.
Charlie worked for Markland Shipping company in his early years before working for a steel company in Ontario shipping and processing stainless steel ingots . He moved back to Nova Scotia and began a new career as a cook onboard a fishing trawler.
He is survived by his wife E. Joyce (Hurlburt); his daughter Joanne (Mark) Pless of Jacksonville, Florida; his sons Laurie (Janet) of Port Medway; Greg (Janina) of Southwest Cove; Brad (Karen) of Liverpool; four grandchildren and four great grandchildren. Sisters Florence Doggett of Bridgewater; Stella Stretch of Waterloo, PQ.; Marjorie Leslie of Halifax; brother Arthur (Marion) of Hunt’s Point.
He was predeceased by his sisters Mildred Parnell; Pauline Moreau, Nellie Selig and his brother Harris.
Cremation has taken place under the direction of Chandlers’ Funeral Home, Liverpool. A memorial service will be held Tuesday, January 12, 2016 at 11:00 a.m. from Port Medway Baptist Church. Reverend Doug Porter officiating. No flowers by request, donations may be made to Port Medway Baptist Church. Online condolences may be made to www.chandlersfuneral.com. Thanks to Dr. Garry Morash, the staff of Queens Manor and Queens Home Support for their excellent care of Charlie.

Offer Condolence for the family of Clattenburg; Charles George