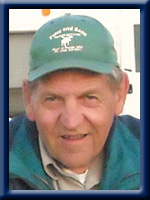 Royden Alvin Charlton, 68, passed away peacefully Friday Sept 3, 2010 at the Halifax Infirmary after a brief illness.  Born in Maitland Bridge in 1942,  he was the son of the late Albert and Inez Arvilla Charlton.  He lived in Maitland Bridge his entire life and was a proud member of the community.

In his younger years, Royden worked at Raleigh Rowter’s mill and as a snowplow operator.  He started work with Parks Canada in 1964 as a labourer and truck driver, helping to build Kejimkujik National Park.  In 1978, Royden found his true calling as a Park Warden and served until his retirement in 1997.  He spent his retirement fishing, hunting and travelling to visit family and friends.

Royden is survived by Iona, his wife of 48 years; his children Chris (Tom Jackson), Cindy (Ray) Forrest and Colin; and his grandchildren, Nathan and Brandon Forrest, Devinne, Colton and Braiden Charlton.  He will be forever in our thoughts.  He will also be lovingly remembered by his sisters Darlene (Rod) Peck and Virginia (Curtis) Orde and several nieces and nephews.

Royden lived a full and rewarding life.  He deeply loved his family and always showed great pride in their accomplishments.  He also enjoyed his time with innumerable friends, whether fishing and hunting with them or retelling stories about past adventures.  Royden was an active member of the community and could often be heard before he was seen at local events.  He will always be remembered for his hearty laugh at a good story, but may be remembered most for his eagerness to help out family, friends and strangers.

Visitation will take place 7:00 to 9:00 PM on Tuesday September 7th at Chandlers’ Funeral Home in Liverpool.

A funeral service to celebrate Royden’s life will be held at 2:00 PM Wednesday, Sept 8th, in Saint Paul’s United Church, Maitland Bridge, with Reverend Tom Watson officiating.  Interment will be in Maplewood Cemetery.  The community will host a reception following the interment at the Maitland Bridge Community Hall and welcome Royden’s many friends to drop by for a story or two.

Family flowers only, please.  Memorial donations may be made in care of Cindy Forrest and will be used to establish prize trophies for a single horse pull event at the Queens County Fair. Online condolences may be made to www.chandlersfuneral.com

Offer Condolence for the family of Charlton; Royden Alvin