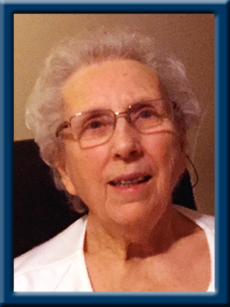 Chandler, Mary Catherine, “Kaye”, left this life peacefully Wednesday morning at Queens General Hospital in Liverpool, with family by her side. She was predeceased by her husband, Walter Robert, “Bob” Chandler in 2003. Their three children were close and involved in their mother’s life daily: Catherine Chandler (Paul Smith) in Queensland, Walter Chandler in Liverpool and Jack (Patricia Beck) Chandler in Brooklyn.
Born in Sydney Mines in 1930, she was one of nine children of James and Christine (Granger) Caldwell. Kaye is survived by sisters Christine (the late Angus) MacLeod and Rebecca (Paul) Penney. She was predeceased by siblings, Andrew (the late Ethel) Caldwell, Athelia (the late Fred) Billard, Dr. Georgine Caldwell; Margurite (Carman) McLeod, Marsha Caldwell, James Caldwell and sister Elizabeth, who died at birth but never forgotten.
On the Chandler side of her family, Kaye was the last of her generation. She was predeceased by Alice ( Russell) Bailey, Elizabeth (Victor) Winters, Eleanor (Arthur) Milson, Jack (Marion Backman) Chandler, Bill (Jean Swaine) Chandler.
She had many nieces and nephews, great nieces and great nephews, both Caldwell and Chandler.
Kaye has six beloved grand children and seven great grand children: Marigold (Steven Mahaney) Chandler-Smith and their daughter, Katherine Rose Mahaney in Edmonton; Stuart (Macarie Stuhr) Smith and their children Amira Kahn, Laila Kahn and Theodore Smith in Ottawa; Nina Chandler (Kevin Healey) in Saint Johns and Rebecca Chandler (Mark Goyetche) Chelsea; Jonathan (Julie Wilden) Chandler and their children, Leo and Keaton Riverview, N.B.; and Jillian Chandler (Matthew Jansen) and daughter Lilah Jansen in Toronto.
After completing a business course in North Sydney, Kaye began working for Leonard Fisheries, a division of Nickerson Bros. She was asked by her employer to go to Liverpool for a year to work for the Nickerson Bros. plant in that town. There she met Bob Chandler. They wed in 1951 and lived in a little cottage beside Moose Harbor where he and his brother, Jack, were building a fish processing business. Kaye was involved in the business, at need, in book keeping.
In short order, Kaye and Bob had three children and, once they were in school, Kaye began a career as a community volunteer, first, with her sister-in-law, Elizabeth Winters, they started Home and School at Mount Pleasant Consolidated School. Over the years, she was involved in many community organizations and initiatives. Some were: the CAMR where she was involved in setting up and running the nursery school and later was manager of the sheltered workshop which was on Penny Lane, ACW at Grace Church, Western Head and later at Trinity Church in Liverpool, Sunday School teacher, Queens General Hospital Auxiliary where she did committee work and, with Pauline Winters, organized the Hospital Hustle for several years, Queens County Representative on the founding board of the South Shore Regional Vocational School, Founding board of Early Childhood Development, to name a few. When Kaye saw a need in her community, she didn’t say, “Someone should do something,” but instead her question was, “What can we do?”
Kaye, mom, was a woman of great faith. She did not fear to die and we know that we have not lost her. We, her children, thank her for the family she built, for each other.
Funeral service will be held on Thursday, November 22, 2018 at 2:00 p.m. in Trinity Anglican Church, Liverpool with Reverend Cherry Workman officiating and assisted by Reverend Judy Cross. A reception will follow the service and will be held in the church hall. A private family interment will be held at a later date in Trinity Anglican Cemetery, Bog Road, Liverpool. No flowers by request, donations may be made to Trinity Anglican Church, Liverpool or to St. Luke’s Anglican Church, Hubbards, NS. Online condolences may be made to www.chandlersfuneral.com

Offer Condolence for the family of Chandler, Mary Catherine “Kaye”