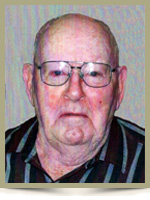 Born in Beach Meadows, he was the son of the late Frederick and Ursula (Manthorne) Chandler.

Ken first worked for Thompson Bros. , before going to work for Bowater Mersey Paper Company, where he worked for many years up until he retired. Over the years Ken also enjoyed his Massey Ferguson Tractor and working on his family farm, where he raised pure bred heifers. He enjoyed fishing and in his younger years he also enjoyed hunting.  He enjoyed the company of his many friends and was always willing to share a story and a laugh.

Visitation will be held Thursday, February 24th, 2011, from 7-9 p.m., at Chandlers’ Funeral Home, Liverpool. A Funeral Service will be held Friday, February 25th, 2011, at 2:00 p.m., from Emanuel United Church, Beach Meadows. Lay Minister Peter Anthony officiating. Burial will be in the Beach Meadows Community Cemetery. Family flowers only. Donations may be made to Beach Meadows Community Cemetery. Online condolences to the family may be made at www.chandlersfuneral.com

Offer Condolence for the family of Chandler; Kenneth Lawrence