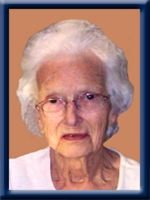 CARTER – Joyce E., 87, of Ottawa, ON, formerly of Sackville, NB and Port Mouton, Queens County, passed away peacefully in Starwood Extendicare, Ottawa, ON on Tuesday, June 3, 2014.

Born in Port Mouton, she was a daughter of the late Stanley and Vera (Wagner) Atkinson.

Joyce worked for the former Madden’s Drug Store in Liverpool and the Zellers Stores in Fredericton and Moncton. She later became the librarian for Mount Allison University in Sackville. She enjoyed gardening and knitting in her spare time.

She is survived by her son Duncan (Irene) Gould of Bonaire, NA, her daughters Rebecca Stulberg of Ottawa, Virginia (Claude) Gosselin of Lake George, 11 grandchildren and 4 great-grandchildren.

She was predeceased by her husband John and brothers Donald and Leon.

Visitation will be Sunday, June 8, 2014 from 7 until 9 p.m. and funeral service will be Monday, June 9, 2014 at 11:00 a.m. both in Chandlers’ Funeral Chapel, Liverpool. Reverend Shona Boardman officiating. Reception to follow service. Burial will be in Peaceful Hill Cemetery, Port Mouton. Family flowers only, donations may be made to charity of choice. Online condolences may be made to www.chandlersfuneral.com

Offer Condolence for the family of Carter; Joyce Evelyn