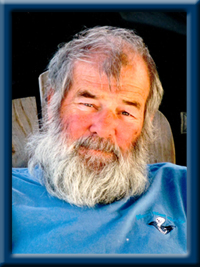 It’s with great sadness that we share the passing of Wayne Thomas Carey, age 72, of Westfield on October 9, 2021. Wayne passed away peacefully at home surrounded by his loved ones after a long battle with cancer. Wayne was born September 9, 1949, in Leominster, Massachusetts to Louis & Helen Carey. He was a machinist by trade, working for the Ithaca Gun Company, Morris Chain, Texas Oil Fields, and Michelin Tire. However, Wayne’s love of the outdoors, especially fishing, hunting, and trapping, inspired several entrepreneurial businesses including a retail fishing tackle store (Rod and Reel), a fishing lure manufacturing company (Blue Water Lures), a gunsmithing business (Carey’s Gun Repair) and finally a commercial fishing company that his wife and daughter still run today.
An avid fisherman, Wayne travelled far and wide for his fishing adventures, leading him to Canada in 1975 where, on his way to Newfoundland to fish salmon, he stopped in Nova Scotia to fish striped bass in Annapolis and found his best catch of all, his wife Yvonne. Wayne passed on his love of fishing to his family, who joined him on countless trips sport fishing in Florida, his fishing cabin in Quebec, and anywhere he could find to cast a line from Newfoundland to British Columbia, “the further north the better”. Wayne also had a profound love for dogs, especially golden retrievers, and his dogs accompanied him everywhere he went, including his fishing adventures.
A jack of all trades, Wayne taught his wife, daughter and anyone else who was willing to learn, independence through teachings in mechanics, electrics, plumbing, carpentry, and ingenuity. Wayne was also a very generous and community-minded person, always quick to help a friend in need and helping his community any way he could, often behind the scenes. He often said “take a kid fishing”, and kept true to those words himself, not only bringing kids fishing but mentoring kids that would come into his fishing tackle store and donating any fishing gear they needed to get them in the water.
Wayne is survived by his wife of 45 years, Yvonne (Frail); his daughter, Genna (Stanley), Timberlea; his granddaughter, Ellie; and his sister, Roberta McFarlane and family, Fort Pierce, Florida. Wayne was predeceased by his parents, Louis and Helen Carey, and his father- and mother-in-law, Keith and Ada Frail.
Cremation has taken place under the direction of Chandlers’ Funeral Home in Liverpool. The service and reception will be held at Westfield Community Hall, October 18th at 2:00 pm, Rev. Vic Adams officiating, followed by committal at Hillcrest Cemetery. In accordance with current COVID-19 pandemic regulations, masks are required to be worn and proof of double vaccinations along with identification are mandatory for attendance. Formal attire is not necessary; your best plaid shirt and torn jeans would be more to Wayne’s liking. No flowers by request, however, donations may be made to either the North Queens Fire Association, North Queens Medical Center, North Queens Ground Search and Rescue or Community Food Resource Network. To share memories or condolences please visit www.chandlerfuneral.com. Lastly, the family would like to sincerely thank Wayne’s medical care team.

Offer Condolence for the family of Carey; Wayne Thomas