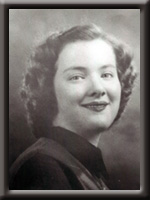 Cameron – Susan “Janet” 79, of Gaspereau, formerly of Liverpool, passed away November 9, 2011 at Vineyardview Guesthouse.
Born at Rapid Falls in a house along the Mersey River in Milton, Queens County on July 18th, 1932, she was the daughter of the late Roy D. and Lucy E. (Whynot) Nieforth.
In the earlier part of her life, she was known as “Honey” to her family. Her father worked for NS Light & Power and the family lived in various staff houses along the Mersey River including one at the Town Site. She graduated from Sheet Harbour High School and went on to graduate from the Normal College. Her first teaching job was at the one-room schoolhouse in Hunts Point. The remainder of her career was spent at elementary schools in Liverpool and Milton. She married fellow teacher Neil Cameron in 1965 and they spent many years enjoying the outdoors and gardening together.
She is survived by son Paul, daughter-in-law Marilyn, and grand-daughter Hannah, Kings County, NS; sisters Barbara Morrison, Oakville, Ont., and Mary E. (Betty) MacKay, Toronto, and brother Wayne, Sheffield Mills.
Janet was predeceased by her husband Neil in 1993 and her brother Roy A. “Brother”.
Visitation will be Sunday, November 13th, 2011 from 6 until 8 p.m. in Chandlers’ Funeral Home, Liverpool. Funeral service will be held Monday, November 14th, 2011 at 11:00 a.m. in St. Gregory’s Catholic Church, Liverpool. Father Brian Murphy officiating. Burial will be in St. Gregory’s Catholic Cemetery, College Street, Liverpool. Family flowers only, donations may be made to any charity. Online condolences may be made to www.chandlersfuneral.com

Offer Condolence for the family of Cameron; Susan Janet