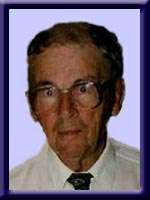 Born in Riverport, Lunenburg Co., he was a son of the late Henry A. and Eva (Creaser) Cameron.

Milledge was a veteran of World War Two serving overseas in England and Belgium. Following the war, he worked for Mersey Paper Company and then Bowater Mersey Paper Company Limited in Brooklyn as a machinist retiring in 1979. Milledge enjoyed golfing and was a member of the Liverpool Golf and Country Club and Trinity Anglican Church, Liverpool.

He was predeceased by his brothers: Robert, Donald, Hugh and Bruce.

Cremation has taken place under the direction of Chandlers’ Funeral Home, Liverpool. A graveside memorial service will be held Monday, November 2nd, 2009 at 1:00 p.m. in Brookside Cemetery, Bridgewater. Reverend Donald Lawton officiating. No flowers by request. Donations may be made to Trinity Anglican Church, Liverpool or to any charity. Online condolences may be made to www.chandlersfuneral.com.

Offer Condolence for the family of Cameron, Milledge M.