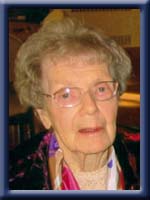 Born in Bridgewater, she was the daughter of the late Fred and Winnie Dodge.

Prior to her marriage to Milledge Cameron in 1948, she worked in various retail stores and as a telephone operator in Bridgewater. After moving to Liverpool, she was involved in a number of organizations at trinity Anglican church. She enjoyed playing bridge and golf.

She is survived by her only son Andrew (Sandra), of Dartmouth and grandchildren Blair, of Inverness, Nova Scotia and Kristen (Philip) Guay, of Rockland, Ontario; great grandson Ethan Guay; sisters in law Barbara Dodge, Bathurst, New Brunswick, Vera Morgan, of Digby and thirteen nieces and nephews.

She was predeceased by her husband Milledge in November 2009 and brothers Ronald, Paul and Herbert.

Cremation has taken place under the direction of Chandlers’ Funeral Home, Liverpool. A graveside memorial service will be held Saturday, April 28th, 2012 at 2:00 p.m.  in Brookside Cemetery, Bridgewater. Chaplain Donald Lawton officiating.  No flowers by request. Donations may be made to Trinity Anglican Church, Liverpool or to any charity. Online condolences may be made to www.chandlersfuneral.com

Offer Condolence for the family of Cameron; Marion Winnifred