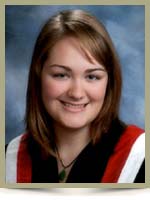 Born in Liverpool, she is a daughter of Ken and Alice (Swinamer) Cameron.

Ali’s life was full of unmatchable wisdom, independence and selflessness. She accomplished  much in her twenty-one years. When she was diagnosed with acute myeloid leukemia almost a year ago, she took it in stride and underwent treatment with unbelievable dignity, grace and understanding. Ali studied respiratory therapy at Dalhousie University’s School of Health Sciences, and she made the best of friends there and during her year at Acadia University.  She fondly remembered her years at Liverpool Regional High School, where she was awarded the Governor General Award, the Queen Elizabeth II Medal, Lieutenant Governor’s Award, and had been student council president.  She participated in many extra-curricular activities and school sports. She had an amazing voice and spent many years participating in music festivals and singing in choirs.

She loved her summer jobs at the Astor Theatre in Liverpool and especially at Long Lake Camp where she started as junior counselor at age 13, became Managing Director at age 20 and made life-long friends.

She is predeceased by paternal grandparents, Walter and Hilda (Roper) Cameron.

Visitation will be held at the Brooklyn Baptist Church on Saturday, April 6, 2013, from 2:00 to 4:00 p.m. and 7:00 to 9:00 p.m.  A Celebration of Ali’s Life will be  will be held at the Liverpool Baptist Church on Sunday, April 7th, at 3 p.m.. Pastor Steven Hopper and Pastor A.J. Thomas officiating.  In lieu of flowers donations can be made to Long Lake Camp, Waterloo, N.S. and please consider being a blood donor to honor Ali’s memory. Online condolences may be made to the family at www.chandlersfuneral.com

Offer Condolence for the family of Cameron; “Ali” Allison Margaret