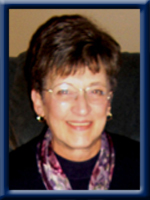 Born in Halifax, she was a daughter of the late Oscar and Dora (Carver) Mills.

Judy graduated from Liverpool Regional High School in 1960 and attended Nova Scotia Normal College in Truro and Dalhousie University where she received her Teacher’s Certification. She taught in Hamilton, ON, as well as various schools throughout Nova Scotia including Colchester/East Hants, South Shore Regional School District, Adult Vocational School in Truro and Shelburne Group Home.  She was a former co-owner, with her late husband Eric, and manager of  Motel Transcotia in Brooklyn.  In her later years, she provided private in-home care to various people in and around Liverpool.

She is survived by her daughters Kelly (Jeff) Whalen of Liverpool, Kimberly Roy (Scott Smiley) of Beaverbank, Wanda Heath and Deborah Noseworthy, both of NL, her sons Dave (Julia) and Ken , both of NL. Her grandchildren Chelsea, Brett, Colby, Bruce, Dara, Crystal, Tania, Gregory, Adam, Tony, Hayley and Kyle. Her brother Father Wayne of Kirkland Lake, ON.

She was predeceased by her husband Eric.

Visitation will be Monday, October 14, 2013 from 7 until 9 p.m. in Chandlers’ Funeral Chapel, Liverpool. Funeral service will be Tuesday, October 15, 2013 at 11:00 a.m. from Trinity Anglican Church, Liverpool. Reverend Judy Cross officiating. Burial will be in Trinity Anglican Cemetery. Family flowers only, donations may be made to the Rose Fund or to the Sunshine Room, QEII, Health Science Centre, Halifax. Online condolences may be made to www.chandlersfuneral.com.

Offer Condolence for the family of Butler; Judith Clare