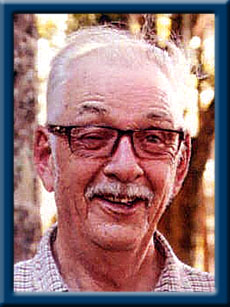 Ronald Chester “Ronnie” Burns (1944-2018) of Mill Village passed away peacefully in Queens General Hospital on 28 December 2018 with family by his side.
Ron was born in Liverpool, Nova Scotia and grew up in Eagle Head, Nova Scotia. He was the son of Chester and Elizabeth Burns and brother to Jean and Heather.
His love of softball started early and many hours were spent on the ball field in Port Medway. He enjoyed spending time with his grandparents, Muriel and Maurice Clattenburg, in Port Medway and this is where he met his future wife Barbara. Little Grammie Burns lived with Chester and Elizabeth and Ron loved to pick on her by finishing her puzzles and sneaking up to untie her apron strings. At sixteen years old, he purchased his first car for a whopping $400. As stories go, he loved to speed along dirt roads and evade law enforcement with some fancy driving maneuvers. (a trait that his daughter Tiffany shares).
In the early 1960s, Ron travelled to Cape Breton to study carpentry at trade school. After his graduation, he worked in Halifax and also helped construct the nurses residence at Queens General Hospital in Liverpool, Nova Scotia.
Ron and Barb married in 1965 and would go on to have two children, Jeffrey and Tiffany. By this time, Ron was working at Bowater Mersey Paper Company where he worked until his retirement in the year 2000.
Ron’s interests were varied. In hunting season you would find him in West Caledonia with his cousin Spencer Bagley. After his retirement, many hours were spent on Ponhook Lake with his brother-in-law, Charlie Wentzell. We are not sure which was larger, the fish or the stories of the fish. He also loved a good game of cards and could often be found playing in card tournaments with his good friend Truman Baker.
Ron was very active in his community as a volunteer fireman for the Mill Village and District Fire Department, with over 35 years of service. He was an avid ball player and a member of the Liverpool Bowling League. When he finally hung up his ball glove, he went on to coach for Jeff’s softball team.
He is survived by his wife Barbara (nee Stevens), son Jeffrey (Tina), daughter Tiffany (Scott), sisters Jean (Charlie) Wentzell and Heather (Kevin) Morrison and many, many nieces and nephews.
He was pre-deceased by his parents, Chester and Elizabeth Burns.
Ron requested no funeral or visitation and the family is honouring his wishes. A celebration of Ronnie’s life will be held Saturday January 5th, at 2:00 p.m. in the Mill Village and District Fire Hall to share stories and memories.
The family would like to express special thanks to Doctors Burrill, Blackadar and Woodford and the staff at Queens General Hospital for their care, compassion and support during Ron’s illness. In lieu of flowers, donations may be made to the Mill Village and District Fire Department or the Queens General Hospital Foundation. Online condolences may be made to www.chandlersfuneral.com

Offer Condolence for the family of Burns; Ronald Chester “Ronnie”