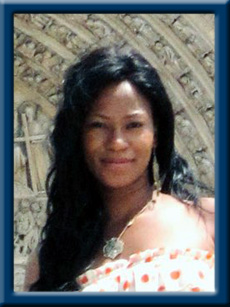 After years long struggles with various bouts of cancer Kellyann Burke passed away peacefully on January 10, 2023, at the age of 48, surrounded by family and friends in Liverpool, NS where she resided for the last 3 years.
She was born in Kingston Jamaica, WI. After leaving Jamaica at the age of 1 yr, she has lived in Durham Region and Toronto Areas, making great friends along the way.
Kellyann enjoyed and played sports such as volleyball and football. She was a certified yoga practitioner. Loved to travel even if it meant going solo. She fell in love with Italy in one of her adventures and at one point considered making Italy her home.
Kellyann dreamt big. Was always smiling, happy and positive all throughout her struggles. Kellyann loved her family dearly and her daughter Kiana was her everything. She is immensely proud of the woman Kiana has grown to be and will become as she continues her university studies in pursuit of becoming a lawyer.
When Kellyann decided to make the move, she had her vision of what life in Nova Scotia could mean for her and her daughter. Although those intentions did not materialize, she did not have any regrets. Her family and friends will continue to cherish her memory by living their lives to the fullest as she would insist that they do.
Kellyann is survived by her only child Kiana Dakota Elaine Miller, 18. She is the late daughter of Marcia Marquis and Ambrose Burke. Kellyann was the eldest daughter of Marcia, leaving behind sisters Kim Marquis and Karen Phillpotts.
Kellyann and Kiana made a home in Liverpool close to her Aunt Sandra Lilieth Marquis and her husband David Wright who played a significant role in her decision to move to Liverpool and pave a new way. They have been of profound support to her through Kellyann’s courageous fight.
She also leaves behinds her Grandfather Winston Marquis, Uncles Bertram “Tony”, Paul and Clive Marquis. Stepfather Richard DeRosa and Step Brother Calef Dove. Lopez Ameer partner to mother Marcia. Her beloved two nieces Sierra and Aaliyah Phillpotts and nephew Jalen Phillpotts, brothers in law Lloyd Phillpotts and Brian Clarke. Her cousins Oronde and Chaka Harris, Taylor, Brandon and Desiree Marquis as well as other cousins and extend family.
Kellyann was predeceased by Grandmother Naina Marquis and Aunt Joan Marquis.
Cremation has taken place under the direction of Chandlers’ Funeral Home, Liverpool, NS. where visitation will be from 1:00 p.m. until 3:00 p.m. Sunday, January 15, 2023 and family remembrances will be said beginning at 2:00 p.m. Donations in Kellyann’s memory may be made to the Queens General Hospital Foundation or to the Canadian Cancer Society.
Kellyann also had tremendous support from friends and neighbours. The family would like to give our sincerest thanks to Richard Smith and Becky MacKenzie for all that you have done and been to our mutual loved one.
We would like to especially thank Dr. James MacKinnon and Dr. Daniel Rayson for their compassion and the care that Kellyann has received from them over the past three years.

Offer Condolence for the family of Burke; Kellyann Marie