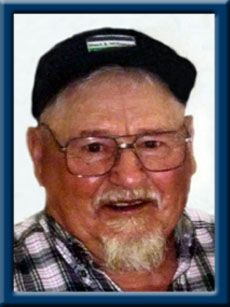 Burgoyne, Douglas Ralph, 86, of Danesville, passed away peacefully on Wednesday, October 18th, 2017 in Queens Manor, Liverpool.
Born in Springfield, Annapolis County, he was a son of the late Ralph and Bernice (Robar) Burgoyne.
Doug was a heavy equipment operator all his working life and in his younger years, he enjoyed hunting. He served with the Blackwatch from 1954 to 1956 and was a volunteer fire fighter with the Mill Village Fire Department.
He is survived by daughters, Melody, of Bridgewater, June (Kevin) Thorburne, of Liverpool; sons, Eddie (Wendy), of Bayport, Eugene, of Bridgewater, Cpl. (Ret.). Darryl (Sherry), of Oromocto, New Brunswick; grandchildren, Cory, Mikey, Laura, Krystal, Andrew, Randy, Nick, Avelynn, Mikey, Devon, Scotty and Timothy; great-grandchildren, Christopher, Shyanne, Kyra, Jayla, Rayla, Peyton, Alyssa, Rachael, Justin, Alba and Iridessa; sisters Ruth Joudrey of Middleton, Elaine (Lester) Russell of Springfield, Shirley Robar of New Germany. Brothers Irvin of Springfield, Russell (Pauline) of Stanley Section, Nelson of New Germany and many nieces and nephews.
He was predeceased by his wife of 58 years Thelma Rose (Weagle) two great-grandchildren; daughter-in-law, Miranda sisters Laura “Mabel” Joudrey and Evelyn and brothers Gilford, Donald, Stanley and infant brother Maynard.
Cremation has taken place under the direction of Chandlers’ Funeral Home, Liverpool. A graveside memorial service will be Monday, October 23, 2017 at 11:00 a.m. in Croft Cemetery, Danesville. Reverend Vivian Moores officiating. Family flowers only, donations may be made to the Nova Scotia Heart and Stroke Foundation, Danesville United Church or a charity of your choice. Online condolences may be made to www.chandlersfuneral.com.

Offer Condolence for the family of Burgoyne; Douglas Ralph