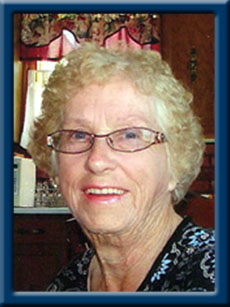 BURGESS – Shirley L., 83, of Port Mouton, Queens County, passed away peacefully in Mahone Nursing Home, Mahone Bay on Tuesday, November 21, 2017.
Born in Port Mouton, she was a daughter of the late Percy and Wilhelmina “Mina” (Smith) Roy.
Shirley worked as a housekeeper at White Point Beach Lodge and the Oxbow Motel in Shelburne for a few years, but worked mostly at the former C.W. MacLeod Fisheries, later Clearwater Seafoods in Port Mouton. She enjoyed cooking, baking, shopping and accompanying her late husband, Purney, on long haul drives transporting goods from Canada to the US. Most of all, Shirley enjoyed spending time with her family and friends, especially her good friend, Marie. She will be sadly missed but always fondly remembered.
Shirley is survived by her daughter Rosalie Burgess-Croft (Michael Croft) of Western Head; her son Christopher (Jean) of Bush Island and her sister Syvilla (Milton) Burgess of Port Mouton.
Besides her parents and her husband Purney; Shirley was predeceased by her son Loran, her grandson Ryan, her sisters Evangeline Roy, Blanche Bowers, Barbara Fisher and her brother Jordan.
Cremation has taken place under the direction of Chandlers’ Funeral Home, Liverpool. A private family graveside service will be held at later date in Southwest Port Mouton Community Cemetery. No flowers. Donations may be made to the Queens General Hospital foundation, Mahone Nursing Home, Mahone Bay or the Canadian Cancer Society. Online condolences may be made to www.chandlerfuneral.com. Shirley’s family would like to thank the staff at Mahone Nursing Home and Dr. Raymond for their special care and compassion for our mom, Shirley.

Offer Condolence for the family of Burgess; Shirley Louise