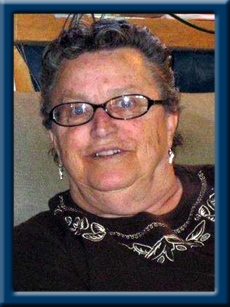 Burgess, Muriel Agnes (Colp) 79, SW Port Mouton passed away peacefully in Queens Manor Liverpool surrounded by as much love from her family as COVID would allow.
Born in Central Port Mouton, Muriel was the 5th child of Gerald and Lillian (Frausel) Colp. Though times were hard she had a good childhood. She was given the nickname lightning, because she ran everywhere and was as fast as lightning! But to her brother Maynard, she was Rosebud.
Muriel and Junior spent many years trout fishing at Cox’s Creek, dragging their kids to the saw dust pile until the bears got too close, moose hunting in Cape Breton, camping wherever they found a spot, even if that meant building a lean-to, picnicing with the family on Port Joli Head or Port Mouton Island and going for drives every Sunday, either to the eastard or westward as Dad would say. Sunday dinners were spent between the house in SW, the camp in Port Joli or the fish house. We had the best of all worlds.
Mom’s working years were spent at the fish plant in Port Mouton and then in Port L’Herbert. She said they were a great bunch and they had a lot of fun! She was so happy that one of them even ended up being her care giver at the manor.
When Dad fished off shore Mom made a trip with him almost every summer. She was never one to shy away from a challenge. I guess that came from being a fisherman’s wife and trying to raise 5 kids.
When Mom was able she loved to travel, which took her to the West Indies, England, across Canada, Newfoundland and bus trips to the States with some very good friends.
She also enjoyed playing cards, listening to old country music, going to bingo and buying pull tickets. Though she never did win the big one.
Mom and Dad had many, MANY friends over the years. Even a few shady characters! But they always had a good time. Especially when everyone got together at the fish house for a jam or cookout.
She was even able to learn how to rug hook thanks to her very good friend Joan. Unfortunately, she only did a few pieces before Parkinson’s robbed her of that enjoyment.
Mom loved birds and always made sure she had feeders full of seeds. Her favourites were the chickadees and she was even able to get them to come into the camp and eat out of the seed cup while she held it.
Mom loved many things but it was her family she loved the most.
The last number of years Mom struggled with many health issues that kept her from doing the things she loved. For as much as we will miss her we are thankful she is at peace and her body is at rest.
Muriel is survived by her husband John (Junior), SW Port Mouton, daughters Chris (Bill) McGrath, Antigonish, Heather (Richard) Whynot, Port Mouton, Cavell (Gary) Nowe, Chelsea, Karen (Chris Hatt) Burgess, Milton, Wendy (Blair) Whynot, New Grafton, and son Roland (Denise) Burgess, SW Port Mouton. Grandchildren Kevin, Janice, Jason McGrath, Matthew and Mark Whynot, Lindsay Lowe, Jeremy Thorbourne, Ethan Whynot, Shannon Nowe, Madison, Chloee and Liam Burgess, 16 great-grandchildren. Sisters Ruth (Murray) Thorburne, Liverpool, Celia Duchesne, Lower Sackville, Inez Hynick, Port Mouton, and sister-in-law Janet Colp, Port Mouton. As well as many nieces and nephews.
Besides her parents Muriel was predeceased by her brothers Clair and Maynard Colp, sister Sharon Allison, her first husband Eric Theriau, great-grandson Mason Frail, brother-in-laws Bob Duchesne, Donnie Hynick and David Allison, and sister-in-law Anna Daury.
Cremation has taken place under the direction of Chandlers’ Funeral Home, Liverpool. At Mom’s request, there will be no funeral service. Donations may be made to Queens Manor, the Heart and Stroke Foundation or IWK Hospital.
Online condolences may be made to www.chandlersfuneral.com
Many thanks to the staff at Queens Home Support, Surf Lodge and especially Queens Manor for the excellent care and kindness they gave to Mom while she was there.

Offer Condolence for the family of Burgess; Muriel Agnes