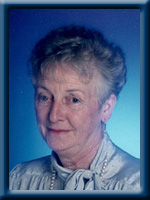 Born December 28, 1930 in Lequille, Annapolis Co., she was the daughter of the late Frank and Jane (Fraser) Fairn.

Cremation has taken place under the direction of Chandlers’ Funeral Home, Liverpool where visitation will be held Wednesday, May 5th, 2010 from 12:00 noon until 1:00 p.m. followed by a graveside memorial service to be held in White Point Cemetery officiated by Reverend Judy Cross. Family flowers only, donations may be made to Trinity Anglican Church, Liverpool, St. James Anglican Church, Hunts Point or to any charity.  Words of Comfort may be sent to www.chandlersfuneral.com

Offer Condolence for the family of Burgess; Eva B.