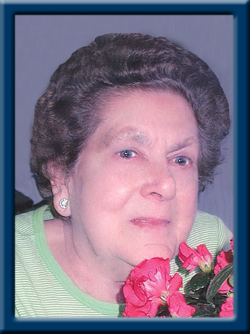 Brown – Margaret Irene,  age 96, of Hunt’s Point, Queens County,  died peacefully at home surrounded by her family on April 19, 2016 .
She was born December 28, 1919 at Beech Hill Farms, Nova Scotia to Eugene and Mary (MacLean) Clancy.
Margaret always spoke fondly about her early years spent in Thurston Harbour, British Columbia. At the age of twelve after her father’s death, she and her family returned to Nova Scotia. She worked in  Halifax, Toronto and then Windsor, Ontario where she married Lawrence Brown and raised her family, but, coming home to  Nova Scotia was always her dream. Dream became reality at Hunt’s Point where she operated Franola Gift Shop for twenty years until 1994.
Margaret will be remembered for her steadfast love of her family, her passion for cooking (especially blueberry muffins) and  was often described as feisty, full of life and a person with a generous heart. She received great joy from the visits of family and friends and just being in what became known as her  “nest” at Hunt’s Point.
She will be greatly missed by her daughters Jeanie, Mary and chosen daughter Mary Kate. She is also survived by several nieces and nephews.
Predeceased by her husband Lawrence,  brother Russell, sisters, Bernadette Hersey, Doreen Cadotte and June Squire.
Cremation has taken place under the direction of Chandlers’ Funeral Home, Liverpool. At Margaret’s request, there will be no service. In lieu of flowers, donations may be made to the VON or charity of your choice. Online condolences may be made to www.chandlersfuneral.com.
Special thanks to her team Barbara Evans, Sherry Miller, Debbie and Joe Fraser,  Danny Batushin, Dr. Mogan, VON, EHS, and Queens General staff.  We couldn’t have done it  without you.

Offer Condolence for the family of Brown; Margaret Irene