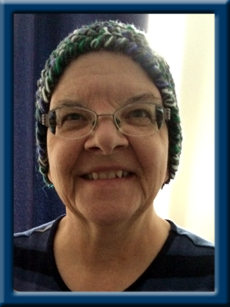 Cynthia Diane Brown – 59, of Middle Sackville, NS
With great sorrow from those left behind, and with great delight that she is now with the Lord, we announce the passing of Cynthia Diane Brown.
Cynthia was born in Kipling, Saskatchewan, to the late Stanley Edward and Tina Ivy (Gravener) Brown. Her father passed away when she was one-and-a-half years old.
Cynthia was blessed with many talents, including photography and writing. After high school graduation she studied outdoor recreation at Kamloops, B.C. Upon graduation she worked in Rockanville, Sask., where she did some preaching at the local United church. Cynthia was deeply devoted to her Lord Jesus Christ and surrendered her life to him. She was a member of the United Church of Canada and Summerville Christian Church, Disciples of Christ. She was a lover of Keith Green’s music and spent ten years at Last Days Ministries in Texas. She did mission work in Mexico and Albania. At the end of her time at Last Days, she felt the call to move to the east coast of Canada to study its early Christian history and pray for Nova Scotia. Some 25 years ago, while in Nova Scotia, she met the second love of her life, Arlene Croft, who became her wife.
In Nova Scotia, Cynthia ran her own business called Prayer Works and worked for Prayer Central online. In 2003, Cynthia and Arlene moved to Kipling, Sask., to be closer to Cynthia’s mother. Out west, Cynthia managed the Land Bank Co-op convenience store. She also started the Mustard Seed Express, a coffee time newsletter for southeast Saskatchewan. She also worked at a group home for people with intellectual disabilities.
Cynthia and Arlene returned to Nova Scotia in 2018. Seventeen months ago, Cynthia was diagnosed with metastatic breast cancer. After treatment, we had ten good months of the cancer dozing before it returned. During her illness she created a website describing her struggles as a Christian gay woman, called FindingTheShore.ca. Cynthia enjoyed travel to places including Oregon, Washington, California, B.C., and the Indianapolis Speedway. She enjoyed kite festivals and checking out the set of Corner Gas. All who saw Cynthia’s smile and the twinkle in her eye felt the presence and goodness of the Lord.
Cynthia is survived by her wife, Arlene; her sisters, Phyllis (Ken MacDougald) and Sharon (Lyle Balogh); brothers, Bill (Grace) and Ed (Margaret); father- and mother-in-law Douglas and Beverly Croft; brothers-in-law Timmy (Valerie) and Kevin Croft; sister-in-law Donna Croft (Randy); and many nieces and nephews.
Keeping in mind the safe practices for COVID-19 which will be strictly adhered to by the funeral staff, please bring your own mask and practice physical distancing, visitation will be held on Friday, June 12, 2020 from 6 until 8 p.m. in Chandlers’ Funeral Chapel, Liverpool. Funeral Service will be on Saturday, June 13, 2020 at 11:00 a.m. also in Chandlers’ Funeral Chapel, Liverpool. Reverend Arlene Croft officiating. A private family burial will take place at a later time. In lieu of flowers, donations can be made through FindingTheShore.ca to help build the Cynthia D. Brown Foundation for hands-on palliative care. Online condolences may be made to www.chandlersfuneral.com.
Special thank-you to Dr. Younis, Nurse Katelin and the palliative care team at Victoria General site 7A. and the chemo ward staff on 11 at Victoria General.

Offer Condolence for the family of Brown; Cynthia Dianne