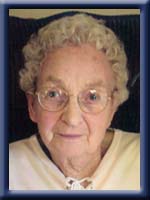 Born in East Chester, she was a daughter of the late Frank and Jessie Stevens.

Elsie enjoyed camping, working in her garden and visiting relatives.

She is survived by her sons Cecil (Lillian) of Hunt’s Point and Murray (Carolyn Douglas) of Pleasantville. Several grandchildren and great-grandchildren. Sisters, Ola Payzant of Port Mouton, Marion Cleveland of Conquerall Bank, Flora Huskins of Liverpool.

She was predeceased by her husband Avery, son Vernon, infant daughter June and brothers Owen and Albert.

Visitation will be Saturday, March 24th, 2012 from 12:30 p.m. until 2:00 p.m. and funeral service will be at 2:00 p.m. both in Chandlers’ Funeral Chapel, Liverpool. Reverend Steven Hopper officiating. Burial will be in Oceanside Cemetery, Hunt’s Point. No flowers by request. Donations may be made to charity of choice. Online condolences may be made to www.chandlersfuneral.com

Offer Condolence for the family of Broome; Elsie Edith