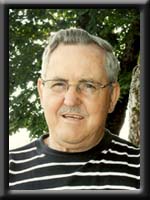 Born in Brooklyn, he was a son of the late Herbert and Lucretia (Meisner) Brewster.

“Alfie” was a long time employee with Bowater Mersey Paper Company Limited retiring in 1994. He enjoyed playing sports, especially softball, playing up until he was 53. He played broomball for many years before taking up coaching. He loved to curl and was a member of the Mersey Bowling League as well as the Brooklyn Marina and was a scout leader for a number of years.

He is survived by his wife of 53 years, Theresa ( Whynot), daughter Robenia  (Heather) of Dartmouth. His sister Margaret (Dennis) Alexander of Windsor and brothers Herbert of Liverpool and Albert (Ellen) of Brooklyn; many nieces and nephews.

He was predeceased by his son Trevor. Sisters Katherine “Kay” and Mildred. Brothers Edward and William.

Cremation has taken place under the direction of Chandlers’ Funeral Home, Liverpool where visitation will be Friday, January 27th, 2012 from 7 until 9 p.m.. Funeral service will be held Saturday, January 28th, 2012 at 11:00 a.m. in St. Andrew’s Anglican Church, Brooklyn. Chaplain Donald Lawton officiating. Burial will be in Seaside Cemetery, Brooklyn. Family flowers only, donations may be made to Canadian Diabetes Association or to any charity. Online condolences may be made to www.chandlersfuneral.com

Offer Condolence for the family of Brewster; Alfred Charles