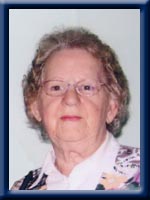 Born in Port Joli, she was a daughter of the late Percy and Willa Mina (Smith) Roy.

Blanche had traveled through Canada and Europe with her husband. She was a familiar face at the Seaside Seafoods Restaurant in Hunts Point where she worked for a number of years. Blanche will be fondly remembered by her family, friends and all who knew her as a loving and caring mother, grandmother and person.

She was predeceased by her husband Ronald her sisters Evangeline and infant sister Ruth and her infant brother Percy.

Funeral service will be held in Chandlers’ Funeral Home, Liverpool, on Sunday, February 21st, 2010 at 2:00 p.m. Pastor Bethe Benjamin-Cameron officiating. No flowers by request. Donations may be made to the Alzheimer Society of Nova Scotia. Online condolences may be made to www.chandlersfuneral.com

Offer Condolence for the family of Bowers – Blanche Mae