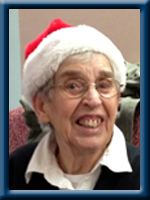 BORDEN – Elizabeth May “Betty”, 84, of Milton, Queens County, passed away peacefully in Queens Manor, Liverpool on Monday, May 25, 2015.
Born in Liverpool, she was a daughter of the late Olive (Whynot) Foster.
Betty was an employee for Fay’s Nursing Home, Liverpool for several years attending to the elderly. She spent many years outside the home housekeeping for others.
She is survived by her daughters Charlotte (Robert) Wolfe, of Brooklyn, Karen Borden (Lawrence Theriau) of Milton and her son Lloyd (Wendy) Borden of Milton. Grandchildren Benjamin, Lesley and Amanda Beth Borden, Michelle and Dale Wolfe. Her sister Catherine (Jordan) Whynot of Milton and her brother Earl of Dartmouth.
Cremation has taken place under the direction of Chandlers’ Funeral Home, Liverpool. A private family interment will take place at a later date. No flowers by request, donations may be made to the IWK. Online condolences may be made to www.chandlersfuneral.com

Offer Condolence for the family of Borden; Elizabeth May “Betty”