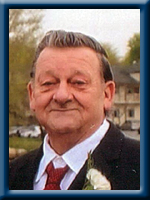 BOLLIVAR – John R., 67, of Liverpool, passed away peacefully in Queens General Hospital on Friday, May 8, 2015.
Born in Bridgewater, he was a son of the late Beverly (Crouse) Baker and Ralph Baker of Port Mouton.
John worked for the former Javal Clothing plant in Liverpool and was a fisherman for 30 years. He enjoyed watching football, hockey, wrestling and playing video games. He loved the ocean and his cats.
He is survived by his wife Carol (Roy); daughters Cathy (Eugene) Conrad of Gull Island Road, Crissy (Kerry) Rodenhiser of Brooklyn, son Tommy (Michelle) of Western Head. Grandchildren Jonathan, Tiffany, Mandi and Rhys; step grandchildren Jamie and Colin. Sisters Elizabeth (Darren) Baker of Rhodes Corner, Darlene (Ross) Roy of Liverpool, half sister Kathy (Larry) Weagle of Conquerall Bank; brother Ricky (Donna) of Liverpool and half brother Timmy of Conquerall Bank.
Cremation has taken place under the direction of Chandlers’ Funeral Home, Liverpool. At John’s request, there will be no funeral service. No flowers. Donations may be made to S.H.A.I.D. Tree. Online condolences may be made to www.chandlersfuneral.com

Offer Condolence for the family of Bollivar; John Richard